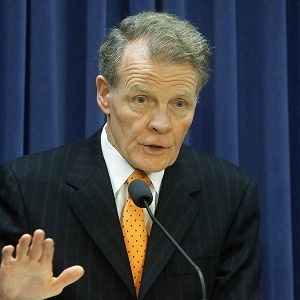 Illinois state Rep. Dan Caulkins (R-Decatur) was not the least bit surprised to learn that Illinois Policy Institute (IPI) is reporting that $45 billion from the new state budget set aside for Gov. J.B. Pritzker’s Rebuild Illinois capital spending plan includes up to as much as $1.25 billion in pork-barrel projects requiring localized spending that could be construed as political payback or special treatment for an elite few.

“Unfortunately, it’s typical for Illinois,” Caulkins told the Chambana Sun. “It’s why we're in trouble. We’re not able to live within our means because we can’t prioritize our spending, because these career politicians think they have to put these projects in any spending bill just to get it passed. I think it’s going to be a serious problem when the revenues don’t come in to match the spending. I fear we're going to be deeper in debt come next May.”

Among the projects IPI has uncovered thus far are $50 million in combined funding for a noise-abatement project at the Chicago Belt Railway Yard in longtime House Speaker Mike Madigan’s (D-Chicago) home district, and for the Illinois Arts Council, which is chaired by Madigan’s wife, Shirley. Lawmakers in Springfield are also ready to cash in with each of them on tap to receive an average of about $3.4 million for pet projects in their districts, with most of the money being directed to Democratic districts.

Much of the extravagance is coming on the backs of already tapped-out taxpayers, who saw the state’s gas tax double to 38 cents per gallon and certain vehicle registration fees jump to $148 from $98 as a way of generating funds to cover all the additional spending.

“I understand one person’s pork is another’s necessity,” Caulkins said. “I think one way to look at it is to ask is this really a function of state government and is it necessary? We still owe over $6 billion to creditors, to companies that have provided goods and services to this state. How in good conscience can you go out and fund a water park or a dog walk or a bicycle path when you can’t pay the people that are working for you? It’s shameful.”