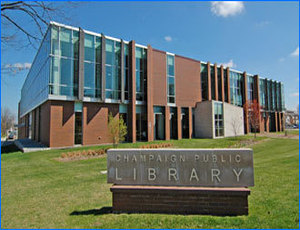 The Champaign Public Library will host four finalists for its open library director position at a public forum Jan. 14 to answer questions from library patrons.

The forum, which will be held at 6:30 p.m. in the Champaign City Building, touches off a two-day gauntlet of interviews and meetings for the candidates. Following the public forum, the candidates will interview with the Library Board of Trustees, meet Champaign government officials, and tour the libraries and community.

"The Library Board of Trustees values and relies upon community input as we make critical decisions to help our library evolve and maintain its place as a keystone institution in the community,” Board President Martin Wolske said. “We look forward to learning more about each of the distinguished finalists and identifying the right person to lead the Champaign Public Library into the future.”

Lyshol has 16 years of experience and currently manages an annual library budget of $1.3 million serving 14,000 people. She has previously worked as a project coordinator for the Bill & Melinda Gates Foundation’s Sustainability Project and as a Library Consultant for the State Library of Oklahoma. She holds a Master’s degree in Library and Information Studies from University of Oklahoma.

Norlin manages a $60 million library system serving approximately 20 million people. She holds a master’s degree in Library and Information Science from the University of Illinois at Urbana-Champaign and has 12 years of library experience. She's also written two books on library websites and business planning.

Meyer oversees an annual budget of $3.4 million for a library system serving 76,000 people and has a record of leading successful capital campaigns to expand library buildings. He holds a master’s degree in Library and Information Science from the University of Illinois at Urbana-Champaign.

Raleigh is in charge of a $12 million independent library district with an audience of 145,000. Prior to her 11 years in libraries, Raleigh spent two decades as a lawyer and business owner. In Elgin, she helped lead a campaign to use the library as a hub for increasing census responses. She holds a master’s of library science degree from Clarion University.

The trustees expect to choose a new Library Director by the end of the month.

Want to get notified whenever we write about City of Champaign Township ?

Sign-up Next time we write about City of Champaign Township, we'll email you a link to the story. You may edit your settings or unsubscribe at any time.